As many of you know by now, we are expecting a baby due May 1, 2015! We are all so excited and I have to say, I think Cecelia is going to be such a wonderful big sister! She loves her baby cousins so incredibly much, is so sweet and gentle with them, and has been so excited about “her baby.”

Photo from the fabulous Nicodem Creative

I’m also happy to say that I am out of the first trimester (17 weeks on Friday!), and feeling so much better! I thought I’d share some of my experiences from those first 12 weeks.

We found out I was pregnant on August 23rd. We started trying the month before, and I totally thought I was pregnant then and took 4 tests! So when the second month came around, and it was the day I should’ve gotten my period, I asked Joe if I should take one. He thought I should wait, but of course I was way too impatient, and while Cecelia was napping, we saw those amazing two lines. Joe and I found out at the same time, just like we did with Cecelia. Joe prayed for me and the babe, and in the days that followed we excitedly told Cecelia and our immediate families (by having C wear a Big Sister shirt I got at Carter’s). Cecelia’s reaction was so sweet-she asked if she could see the baby and when we said we couldn’t see the baby in my tummy yet, she asked, “Can I just take a peek?” She said maybe it was a girl and that she wants a baby sister (she also tells us she wants a baby brother so I know she will be so happy either way!).

I started taking these high quality supplements while breastfeeding Cecelia. I heard about Shaklee when she was about 6 months old, and started the Vitalizer a couple months later. When Joe and I knew we wanted to expand our family, I added in an additional B-Complex, since folic acid is so very important even before conceiving. Dietary folate, a critical B vitamin, isn’t easily absorbed, so Shaklee developed a unique folic acid coating that makes the nutrient more accessible to promote absorption. This regimen is what I have continued to take while pregnant.

I started to feel really nauseated at 6 weeks, and having just a little bite of these bars would help ease my stomach. Then I completely lost my sweet tooth for a couple months and wanted nothing of them hah!

I’ve been keeping notes from each week on my Google drive, so I’ll share some of those here.

FOUR WEEKS: Still feeling well, no aversions, eating a lot of protein and salads, seem to crave more salty and spicy foods. Noticed I get out of breath much more quickly (blood volume increasing?) and feeling more breast tenderness and-sorry tmi-peeing more often! By the end of this week though, I’m starting to get super tired and have to take a nap-30 glorious minutes that I so needed! Getting some sciatic pain at night. 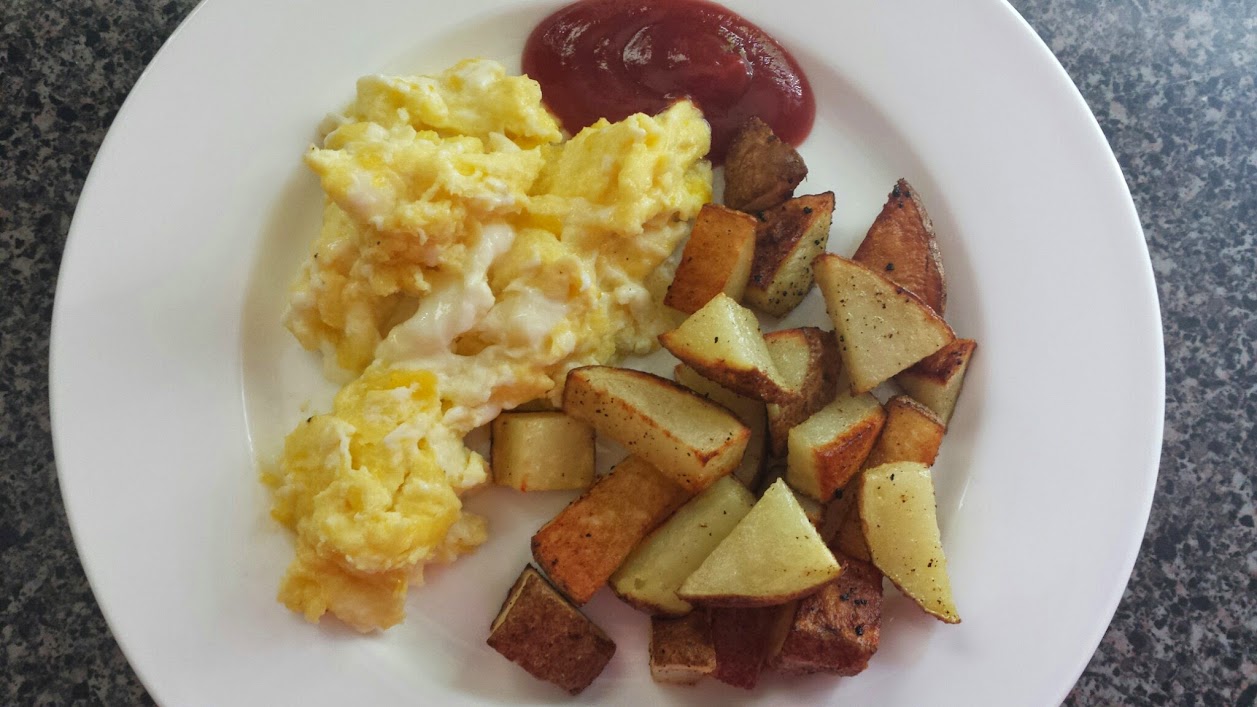 Mmm that was a good breakfast. Roasted those potatoes super fast in our toaster oven and they were so good!

FIVE WEEKS: Sciatic pain better at night. Still want more savory foods. When I’m not pregnant, I usually have a sweet tooth. This desire for more savory foods is similar to how I felt with Cecelia. Perhaps it’s another girl? We are so so so excited for a boy or a girl! By the end of five weeks, I’m starting to feel nauseous. The night before I was six weeks, I felt like I could throw up, which made me panic. I HATE throwing up (who likes it?) so I started to feel anxious which obviously doesn’t help. I prayed, asked Joe to pray, and thankfully felt a bit better by the morning.

SIX WEEKS: Definitely feeling more nausea and having a queasy stomach, especially in the evenings and night time (another similar symptom from my pregnancy with C). Feel better when I’m standing. So emotional and hormonal-been crying quite a bit. Appetite is all off. Evenings are hardest and if I wake up during the night. C has been such a blessing to me. She went and got me more saltines and we are laying in my bed together eating them. I asked her if she wanted her water bottle and if she could get it from her bed. She wanted me to and I told her OK but my tummy doesn’t feel good and she said, “OK” and got down and got it herself. She has been going to get her own snacks like a cheese stick too. Such a good helper. She was rubbing my tummy and said, “I like that baby right there,” and another time I asked her, “Are you going to teach your baby brother or sister how to…” And she said, “Dance! And I’m gonna kiss her! And play tag with her! When she can walk.”

I’m drinking a little bit of ginger ale and a lot of Performance (all natural “gatorade”) so thankfully I’m not dehydrated. Craving and eating baked mostaccioli and toasted Subway subs. Cannot wait for the first Dr. appt in a week! No surprise here, but Joe has been taking such amazing care of us. Coming home from work and taking care of me, playing with Cece as usual, running out to get me food, cleaning the house, and putting C to bed. Yesterday he took Cecelia to his parents all evening and then today I came home with her from my parents and the house was spotless, laundry folded, new internet hooked up, all after a hard days work, and he never complains! I love him so much and I’m so grateful for him. Our parents and my sister, Katie, have been helping me and supporting us SO much too. I am so blessed, thank you Lord for my incredible family.

SEVEN WEEKS: starting to feel better. Still not normal but not so nauseous and feel more normal emotionally too. Been eating sooo much Panera lately: salads, soups and sandwiches. Trying to not let much time go by between eating otherwise I feel so nauseous.

Monday, September 15: spoke too soon. Feeling awful today. Had to call mom in the morning and once again she cared for us all day. Have no appetite and more nauseous. Try to eat mashed potatoes and few bites of chicken for dinner. Cried again at some point this week (lots of crying during these sick weeks). I miss spending time with Cecelia, feeling like my happy self, grocery shopping, cooking, and just feeling like a healthy, normal human. I’m not trying to sound like an ungrateful complainer, just being honest with what I was experiencing. BUT I had my first Dr appointment and got to see the baby and hear the heartbeat–I’ve been wanting that for weeks and it was such a blessing! Heart rate was 171 and measuring right on track-thank you Jesus!

EIGHT WEEK: Have waves of worse nausea and waves of feeling more normal. Still tired and can only take quick cat naps before I’m just wide awake. Some insomnia during night too where I wake up and am wide awake. Ate an orange and English muffin with peanut butter for dinner (had pizza earlier which didn’t settle well). Went on a beautiful walk at night with Joe and Cece-feels good when I’m up and walking but then I start to get those uncomfortable hunger type pains. Felt good enough to put Cecelia to bed which was a very sweet time.

Saturday: Majorly craving sushi and fish tacos!! So nice to have an appetite and got the fish tacos. Realize I’m still not normal after I eat, but so thankful to be functioning, out with Joe and Cecelia, and enjoying a beautiful day. Ate dark chocolate for the first time in weeks.

Sunday: really think I’m turning a corner! Still not my normal self but better! Bought more oranges-loving them! Still eating out all the time though. I can eat salads etc but just do not ever want to cook. The idea of drinking one of my own smoothies makes my stomach churn. So thankful I am feeling better!! But now I’m nervous something could be wrong-how obnoxious am I?!

NINE WEEKS: Friday: well apparently baby wants me to know he/she is just fine! Back to being nauseous! Twice I did half a unisom before bed which helped my nausea to go away and didn’t leave me feeling drugged the next morning. Finally got my sushi craving fix with some cooked sushi. Still not eating normally though. Can’t eat much and stomach still not normal. Cravings: pickles!! Eating a lot of Trader Joe’s kosher dill pickles. Eating an orange every night. Also craving a Chicago style hot dog, but I get a cheeseburger instead.

TEN WEEKS: Feeling better and more energized–getting more accomplished! Still want a hot dog with everything and so many pickles! Went to Trader Joe’s for the first time in many weeks and stocked up. So wonderful to want to grocery shop and cook again! And noticing now I get hungry like I used to-not the horrible hunger that makes you feel sick. I got TJ’s all natural beef hot dogs and Joe grilled them and I ate two! Been making nachos lately too haha. So happy to clean, run errands, and cook again!

ELEVEN WEEKS: So grateful to be feeling better and better. Still super tired in afternoons and/or evenings and going to bed early but I still sleep horribly. I wake up to pee, or I get some insomnia during night, and still feel queasy during the night and before bed. During the night and this morning I think I felt my uterus (hah that sounds so weird)! I never knew I could when pregnant with Cecelia and I don’t know what made me press around on my stomach but it felt so hard! So cool! 11.5 weeks Dr appt first time with doppler-heartbeat was 166 BPM! I gained one pound in a month.

TWELVE WEEKS: This week flew by!! Feeling sooo much better! So thankful!!! Sleeping better too! Had like two tiny little waves of queasiness-nothing horrible! Still loving oranges. Drinking some coffee again and normal appetite, although still don’t have a sweet tooth (besides fruit) like I normally do! Also loving orange juice with my breakfast. Here was toasted sourdough, egg, cheddar, avocado, and sriracha.

Thanks so much for following along on this crazy long post! I’m 16 weeks now, and the weeks are seriously flying by. Those sickie months went by at a snail’s pace, and now I can’t believe I’m feeling tiny baby flutters in there, and that we will be finding out if there is a baby boy or a baby girl in just a few short weeks! Really soaking up this time, and getting so excited as I think about our family of four.